One of my favorite neighborhoods. I tell people it's like suburban living within the city limits. In fact, I was born and raised in "The Manor", so obviously amazing things happen in this small nook on Chicago's north side. :)

Dimensions of the Neighborhood: 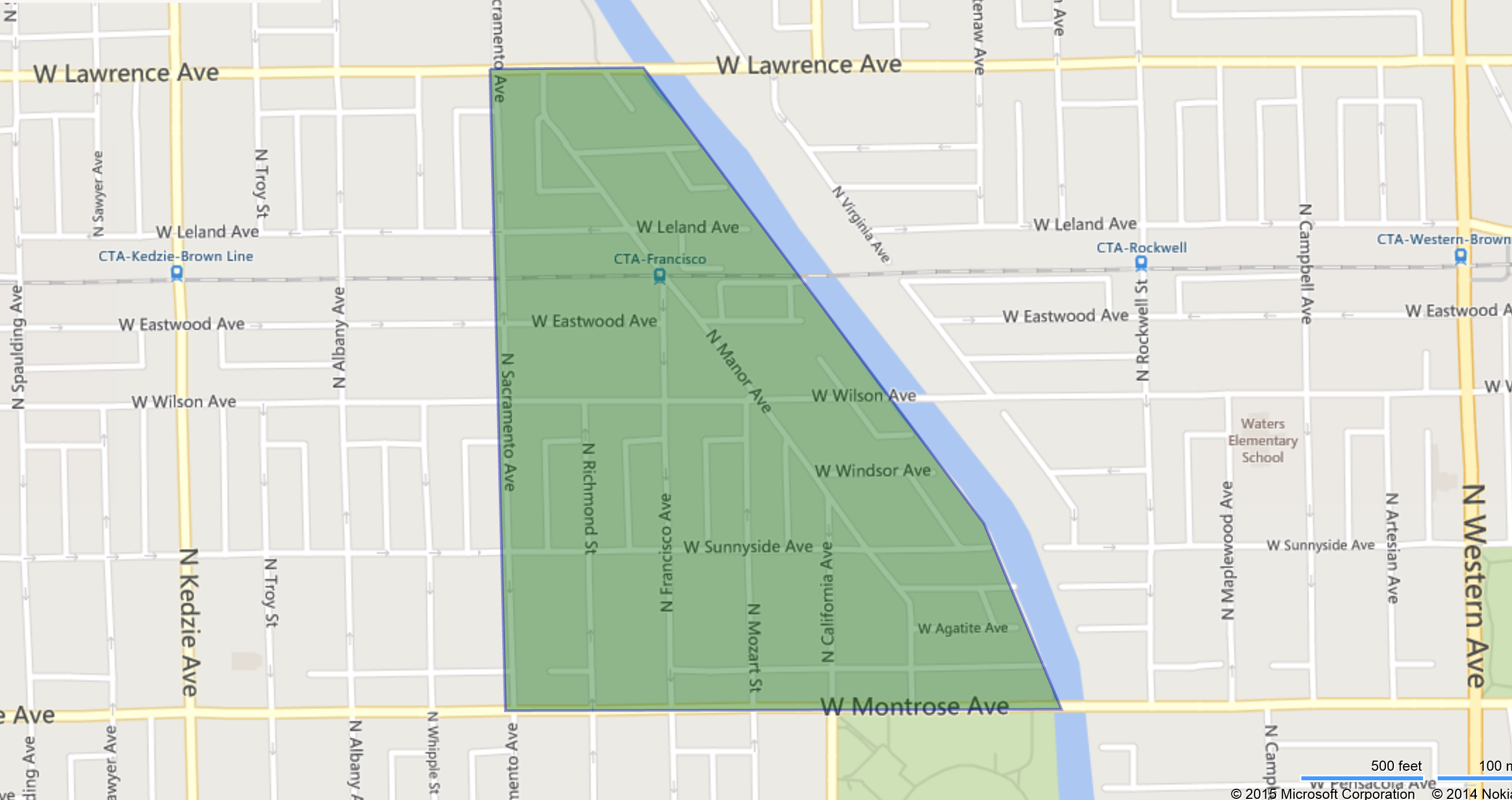 Despite its name, Ravenswood Manor isn’t a part of Ravenswood, but rather a small area of well-kept single-family homes and multi-unit buildings located across the river from Ravenswood in the Albany Park community area. It originated as a development in 1909, and was designated as a historic neighborhood on the National Register of Historic Places in 2008.

Montrose and Lawrence avenues mark Ravenswood Manor’s north and south boundaries, Sacramento Avenue is the border to the west, and the river marks its eastern edge. The river itself may be Ravenswood Manor’s best asset, with its picturesque views and promise of river access to homes along its banks.

Ravenswood Manor consists almost entirely of homes, so its amenities are found mostly in Lincoln Square and the greater Albany Park area.

The Ravenswood Manor Improvement Association is a local non-profit organization that conducts neighborhood events and works to maintain the area’s unique characteristics.

Ravenswood Manor Park, also known as Playlot Park, is the only park in the neighborhood. While small, its green space and walking trails are popular with residents.

Ravenswood Manor boasts many diverse Victorian and Prairie School homes, bungalows, brick row houses, and converted vintage apartments. Many of the homes occupy extra-wide lots. Older vintage courtyard condos, contemporary townhomes and half-duplexes make up the rest of the housing. Single-family home price range from the $500s to more than $1 million, with an average price hovering in the low $600s. Condo prices start in the lower $200s.

Ravenswood Manor residents have access to the Loop and the rest of the city via the CTA's Brown Line with stops at Western, Francisco and Kedzie. Buses run through the neighborhood on Lawrence and Montrose avenues, as well as on nearby Western and Kimball avenues (accessible by train or a short walk) and on a section of California avenue to the north. The closest highway is I-90/94, about 2 miles west or south.

The almost wholly residential Ravenswood Manor boasts little in the way of commercial development or nightlife. However, a few small restaurants and shops, including Rockwell’s Neighborhood Grill, can be found directly around the Rockwell Brown Line station, located just across the Chicago River, and nearby Lincoln Square and Albany Park both boast many traditional restaurants, with newer trendier fare added to the mix. To the west, Semiramis offers Middle Eastern fare.

The eclectic and acclaimed Old Town School of Folk Music, a popular entertainment venue and music school, is also a quick jump to the east in Lincoln Square.

No public or private schools are within the small confines of Ravenswood Manor. The neighborhood is served by schools in adjacent Lincoln Square or Albany Park.

Based on information submitted to the MRED as of date and time shown below. All data is obtained from various sources and has not been, and will not be, verified by broker or MRED. MRED supplied Open House information is subject to change without notice. All information should be independently reviewed and verified for accuracy. Properties may or may not be listed by the office/agent presenting the information. © 2019. http://www.mredllc.com/comms/resources/DMCA_Notice.pdf

Thank you for contacting us, we'll get back to you shortly.

Sorry, we are unable to send your message at the moment. Please try again later.